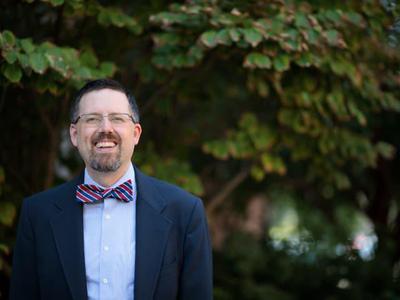 Christian History, a magazine advised by Jonathan Den Hartog, professor of history and the chair of Samford University’s Department of History, won an award from the Evangelical Press Association this spring. Den Hartog gave guidance on the articles involved, providing editorial feedback and also contributed to the magazine. The issue from spring of 2021 was titled “America’s Book: How the Bible Helped Shape a Nation.” The magazine was awarded a 3rd place award in the “Higher Goals Competition 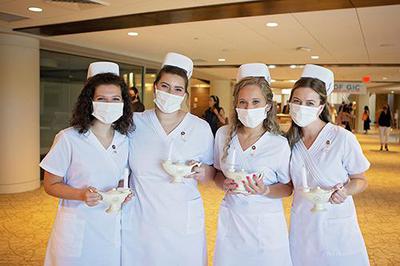 On May 6, Samford University's Moffett & Sanders School of Nursing recognized 72 Bachelor of Science in Nursing graduates in its Class of 2021 during the school's annual pinning ceremony. The pinning tradition is a special rite of passage for graduating nursing students. While the diploma represents a graduate's proficiency in the science of nursing, the pin is representative of their mastery of the art of nursing. "The pinning tradition ceremony dates back to the 1860s when Florence Nightingal 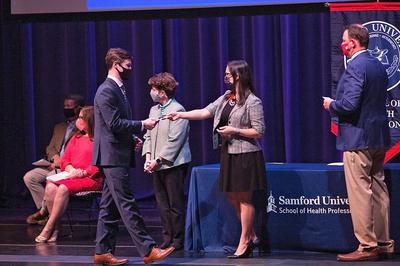 Samford University's School of Health Professions honored 92 first-year graduate students at the Commitment to Calling ceremony on April 19. The ceremony included students in the school’s three graduate programs: Doctor of Physical Therapy, Master of Science in Physician Assistant Studies and Master of Science in Speech Language Pathology. This annual ceremony encourages students to use their gifts and talents to serve others. They are guided by the school's theme verse, 1 Peter 4:10, which rea 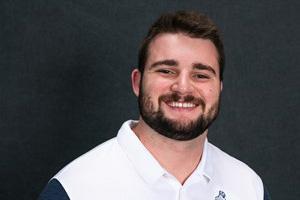 For Gavin Orr, the spring semester pushed him to achieve a new level of multitasking. Not only was he a first-year Doctor of Pharmacy student in Samford University’s McWhorter School of Pharmacy, but he also played offensive lineman on the university’s football team. Throughout the season, which was postponed to the spring due to COVID-19, Orr spent his days in class, afternoons at football practice and evenings on campus studying. " I could really only study after 7 or 8 p.m. when I got back f 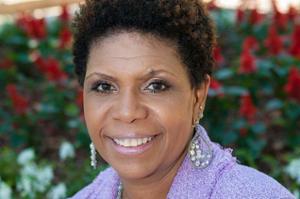 Ratcliffe is Recognized by Alma Mater for her Visionary Leadership

Carol J. Ratcliffe, professor, and chair of the Department of Healthcare Administration in Samford University’s School of Public Health, was selected as one of University of Alabama at Birmingham (UAB) School of Nursing’s 70 Visionary Leaders. The Visionary Leader award recognizes alumni of the UAB School of Nursing “for exemplary service in education and research, exemplary leadership, innovation and far-reaching impact on nursing and healthcare on state, national and international levels. 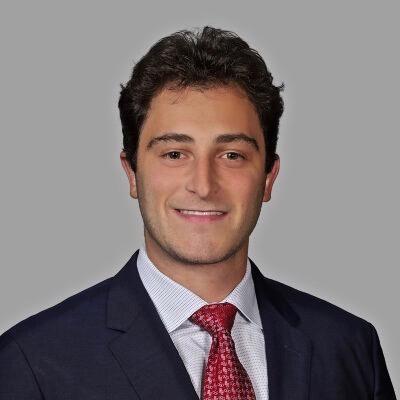 Trey Melazzo, a fourth-year Doctor of Pharmacy student at Samford University’s McWhorter School of Pharmacy, was named to the inaugural class of the American Pharmacists Association (APhA)'s executive residency program. APhA is the largest and oldest pharmacy association in the United States. The executive residency program provides new pharmacists with training and experience in the fundamentals of association management. Only six students from pharmacy schools across the United States were se 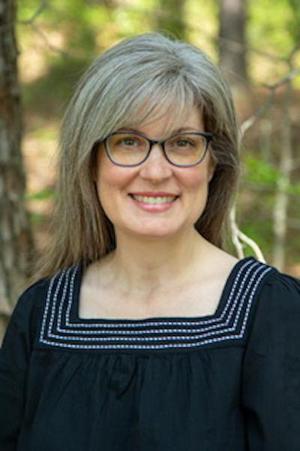 The path to obtaining a degree is not the same for everyone. More than 30 years after initially enrolling at Samford, Karen Redding will be graduating in the class of 2021 with a bachelor's degree in human development and family science (HDFS). "I was a student in the 90s,” said Redding. “I got married between my sophomore and junior year, and before my senior year, we got pregnant with our first child. I got very sick and was unable to return because of the complications of that pregnancy." F 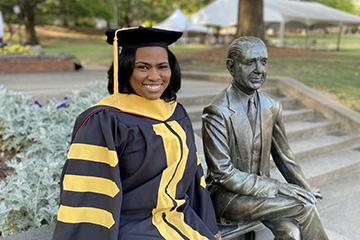 At Samford University’s spring commencement ceremony, Rachel Stokes became the first graduate of the School of Public Health’s Doctor of Public Health, a professional doctoral program designed to prepare graduates for leadership roles in the field of public health, focusing on the practical application of public health principles across a variety of settings. The degree’s purpose aligned perfectly with the next step in Stokes’ career. “My ultimate goal is to move into public health leadership,” 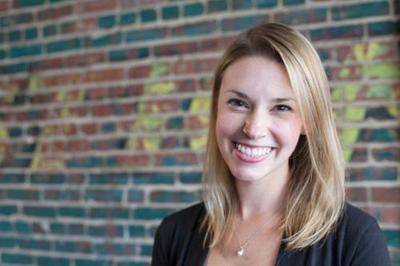 Samford University alumna Emily Leithauser Hart ‘09 has a passion for technology and translating it for the general public. In 2020, she served in an integral role at MotionMobs, the Birmingham-based firm responsible for building Alabama's COVID-19 exposure notification mobile application, GuideSafe. At Samford, Hart earned her bachelor’s degree in journalism and mass communication, and it was during this time that she discovered her interest in blending technology and teaching. She recalls a s 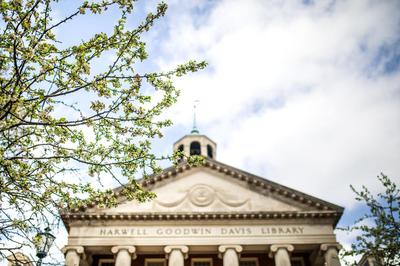 On March 16, 2020, in response to the escalating global pandemic, Samford University moved to online instruction, a measure deemed necessary to protect its community. Employees of the University Library had to quickly adjust and determine how to makes sure the library’s resources were made available virtually to meet the needs of thousands of students, faculty and staff. The greatest challenge, according to Dean of University Library Kim Herndon, was making sure all library staff had the necess 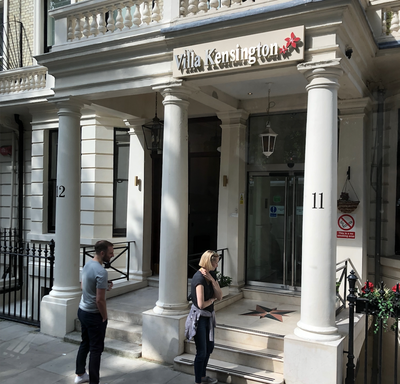 The U.S. census bureau is looking to hire approximately 1,000 census workers in all areas of Birmingham for the 2020 census. “Jobs range from $15-20 an hour with .58/mile reimbursement, are temporary (two to four months), and range from 2 to 40 hours a week,” according to a press release from the City of Birmingham. “Applicants can set their own schedule to work in their communities of choice.” The census helps determine funding for states and communities as well as determining the number of lines of congressional districts. The census has occurred every 10 years since 1790. “A waiver issued by the President and the State of Alabama declares that all wages earned while working for the US Census in 2020 will NOT impact wage restriction qualifications for federal and state aid programs, such as SNAP, Medicaid, disability, Social Security and more,” the press release said. In 2019, President Donald Trump attempted to add a citizenship question to the census but was later struck down by the Supreme Court. Critics viewed adding the question as a barrier from keeping people from participating. 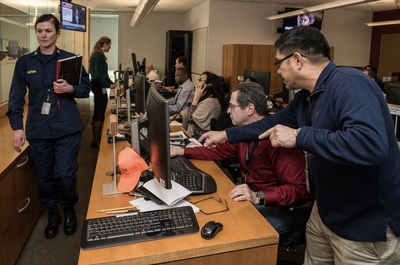 In an email sent to Samford University faculty on Wednesday, Provost Michael Hardin instructed all teaching faculty to develop a continuity plan if classes are canceled should the spread of the coronavirus reach campus. “Unfortunately, worldwide events concerning the potential spread of the Coronavirus are forcing us to take some immediate steps for emergency preparedness,” Hardin said in the email. “We are one week away from spring break, and many members of our community have travel plans tha 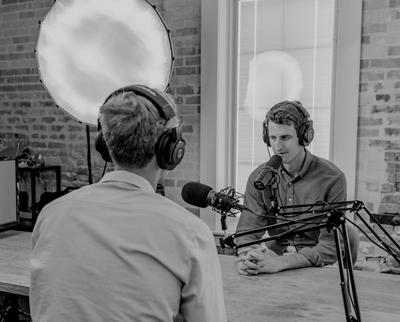 An online survey allowed journalists to anonymously disclose their salaries

In early November, where journalists could anonymously disclose their salary, company and location, went viral. In a matter of weeks, the spreadsheet had over 1600 responses from media workers across the continent. The purpose? To challenge the workplace taboo of sharing your salary according to the spreadsheet. "Talking about how much or how little money you make feels taboo, and it shouldn't. Knowledge is power and Glassdoor info is hit or miss," the document said. "Wouldn't it be great to kn 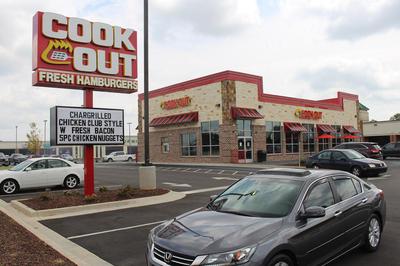 Several businesses have been under construction in the Wildwood area of Birmingham along Lakeshore Parkway. Among these include a movie theater, fast-food restaurant and an apartment complex. Birmingham Premiere Lux Cine’ & Pizza Pub is a movie theatre that recently opened on the site of the old Carmike Cinema, and more recently Point of Grace Ministries. The theater boasts luxury reserved seating and in-seat dining. The seats will also be equipped with D-BOX simulation, a feature that moves vi 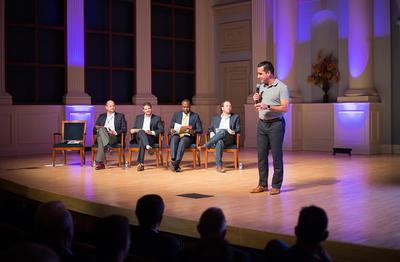 The Brock School of Business will host the sixth annual Lion’s Den event on Thursday, Oct. 10 in the Wright Center. The event attracts aspiring entrepreneurs from across the world to pitch their business idea in a “Shark Tank” style event. Presented by Cedarworks Inc., “the goal of the Lion’s Den is to inspire, educate and mobilize people to invest their time, talents and other resources in the Kingdom through a “business as mission” (BAM) platform,” according to a press release from Samford. 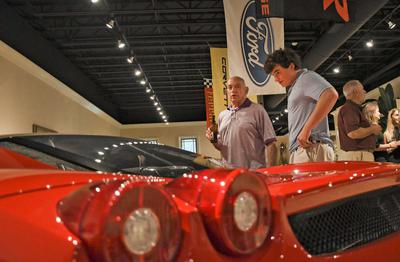 The Mountain Brook Driving Club is the place to be for local car enthusiasts. Members are joined together by the common love of driving and appreciation of cars. “We are a group of people who get together with the common interest of cars, new and old,” said Alan Thacker, the club’s vice president of events. “We discuss new cars coming out or problems with a car.” Most members of the club live in Mountain Brook, but city residency is not required to join. Thacker, for example, resides in Pelham

Mountain Brook resident and recent Mountain Brook High School graduate Katelyn McInerney has received scholarships totaling $56,000. Mclnerney will receive $36,000 from the Diller Teen Tikkun Olam Awards and will be receiving $20,000 from the Coca-Cola Scholars Foundation. “The scholarship enables me to pursue my vision in helping others and achieving academic success without concern for the financial burden,” Mclnerney said. The Coca-Cola scholarship is given to graduating high school seniors 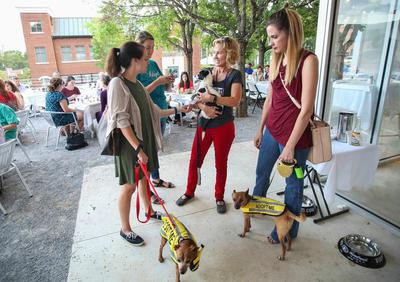 Vino hosts Pooches on the Patio

Mediterranean restaurant and wine bar Vino will be hosting its fourth annual Pooches on the Patio Sept. 12 from 5:30 to 8:30 p.m. The event benefits the Greater Birmingham Humane Society and is sponsored by Tito’s Handmade Vodka. “We are all animal lovers at Vino and always enjoy having our patio full of dogs, especially when it’s to celebrate our eighth anniversary,” Al Rabiee, owner of Vino, said in a press release. The event will feature craft cocktails, including special drinks made for th 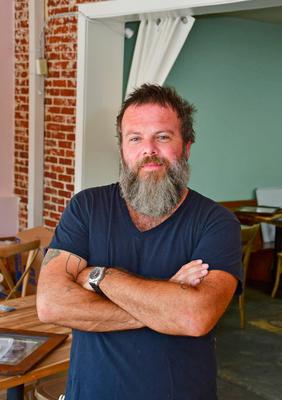 Making and sharing food have always been a part of Trey McLemore’s life. Soon, he’ll do it in Mountain Brook. This fall, McLemore and his business partners, longtime friends Tim and Christy Lowe, will open Bobby Carl’s Table on Cahaba Road in English Village. The restaurant will feature seasonal Southern comfort food that has fresh and lighter takes on classic recipes. “I try to go to farmers markets as much as I can,” McLemore said. The lunch menu at the restaurant will have elements of a me
Load More Articles
Close ✕